Retiring on Long Island; Should I Stay or Should I Go?

Long Island has a lot to offer but it’s also a relatively expensive place to live, especially for retirees. While other locations may be desirable retirement destinations once you’ve adjusted to the warmer climate and lower living costs, will you and your spouse be happy there for the long term?

Long Island boasts plentiful entertainment choices including miles of beautiful beaches, mass transit, world-class health and educational facilities, a diverse economy plus relatively easy access to New York City and major transit hubs. Such attributes make Long Island a desirable area. However, all of this comes with a cost and many of those who are preparing to retire would be wise to take this into consideration.

Each of us knows that for all of the positive aspects Long Island has to offer, taxes and other so called cost-of-living expenses here typically rank among some of the highest in the nation. Although a simple internet search will uncover numerous areas where the cost of living is less than on Long Island, many retirees and pre-retirees frequently express to us their desire to remain here.  While the lure of a warmer climate and lower cost of living are enough to justify a move for many from Long Island, others do not like the idea of being far from family and friends, as well as health-care providers, houses of worship and other elements of home.  Click on the link bellow to examine positive and negative factors that can help you decide whether to stay or go and how to turn whichever path you choose into an affordable reality. 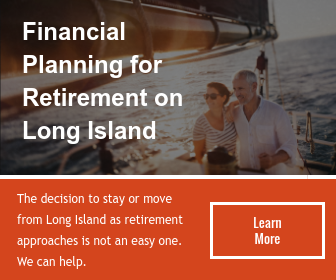 Our mission is to serve the personal financial planning and investment management needs of those preparing for retirement, and the large population of retired individuals who have come to depend on us.